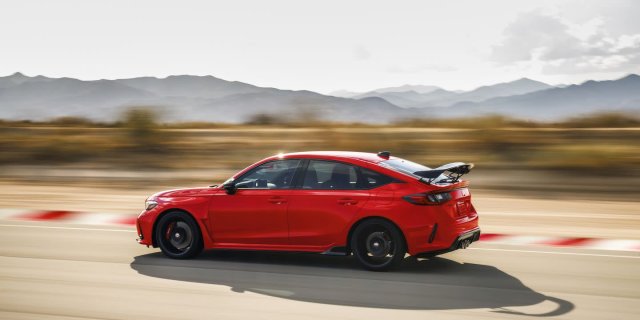 A leaked Japanese brochure found by a Civic Type R forum yesterday indicated the car would get 326 horsepower. The previous-gen Type R made slightly less power in U.S. spec cars—305 hp vs 315 for the rest of the world. It appears that this is still the case for the new model.

A Honda spec sheet says that boost pressure for the new Type R is up just 0.1 psi over the old car, for a total of 23.3 psi. The increase in power is actually thanks to a redesigned turbo that features a new turbine, and tweaks to the intake and exhaust systems. Compared with the old model, the new Civic Type R also has a larger grille opening feeding a bigger radiator and larger fan. Some early last-gen Civic Type Rs had heat-soak issues on hot track days, and Honda wanted to make sure that wasn't an issue with the new car.

The car gets a lighter flywheel, too, and Honda says that the shifter has a new "high-rigidity lever and optimized shift gate pattern for a reassured and hyper-precise gear change." It's hard to imagine any gearshift being nicer than the last Type R's, but this is Honda after all. The final drive is also shorter, 3.842 vs 4.111 for the old car.

Like the regular Civic, the new Type R sits on a slightly larger wheelbase than its predecessor, and track widths are up by an inch in the front and 0.75 inches in the rear. As we noted before, the 245/30R20 tires on the old car have been eschewed for 265/30R19, which are significantly wider and shorter.

Extra power, shorter tires, and shorter final drive should contribute to a noticeable improvement to the Type R's acceleration, not that the old one was slow by any stretch of the imagination. We don't yet know the weight of the new Type R, though other versions of this current Civic weigh around the same as their predecessors.